Facing increasing persecution for his independent thinking by the Anglican establishment, by 1635, he was persuaded to leave England for the New World rather than face imprisonment, or worse.
Laurie W. 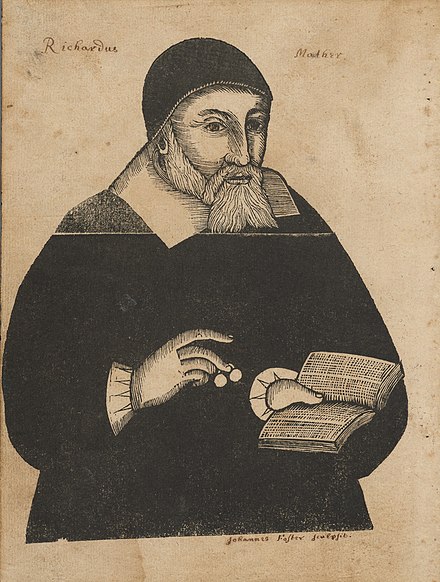 Illustration of Richard Mather by John Foster, circa 1675.

A 10th Great Grandfather, Rev. Richard Mather (1596-1669) started his professional life as a teacher at age 15; teaching first in Cheshire, then Lancashire, England. After a brief period of study at Oxford, he began preaching in Toxteth Park, Liverpool (where he had taught since 1612), in 1618.

A non-conformist Protestant, he was suspended from the ministry in 1633 and 1634 for, among other things, not wearing a surplice. Facing increasing persecution by the Anglican establishment for his independent thinking, by 1635 Richard was persuaded by Rev. John Hooker and Rev. John Cotton (also a 10th GG) to leave England for the New World rather than face imprisonment, or worse.

On June 4, 1635, Richard Mather left England with his wife and children aboard the James. On the voyage over, their ship encountered The Great Colonial Hurricane of 1635, a hurricane that produced great damage with high winds and 14-20 foot storm surges from Massachusetts to Rhode Island, according to accounts by John Winthrop and William Bradford.

After sheltering off New Hampshire and the Isle of Shoals, the James lost all but three anchors before managing to stagger into Boston Harbor, “her sails rent in sunder, and split in pieces, as if they had been rotten ragges” on August 17th (according to Rev. Dr. Increase Mather, Richard’s son).

Despite the hardships he experienced early in life, and the devastating storm he survived with 99 other passengers, Rev. Richard Mather was a prolific writer, sermonizer, and much beloved Congregationalist preacher in Dorchester, Massachusetts. He worked to free the slave Dorcas Ye Blackmore, and is the subject of the first woodcut published in a book in North America, as well as possibly one of the first authors (with his co-authors) published on the continent. His name and work as a teacher is honored in one of the oldest public schools in North America, The Mather School, established in 1639. It still operates in Dorchester, Massachusetts, today.

I am thrilled to have found that Rev. Richard Mather is my 10th GG father. Although our relationship to Rev. Mather wasn’t known until my very recent research into our ancestry, my 10th GG’s choice of careers and avocation (teaching, ministry, and writing) is eerily reflected in the career paths (teaching, ministry, writing) of myself and members of my family. I'm proud to have such a strong, civic-minded, progressive-thinking non-conformist as an ancestor!