She was absolutely fearless and interested only in improving as much as possible the physical comfort of the men.
Karen B. 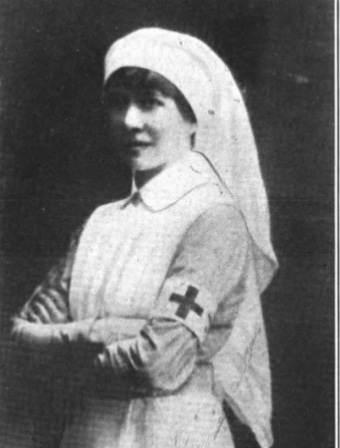 My great-great grandmother’s niece, Cora Van Norden, the privileged daughter of an old New York family, served with the Salvation Army during World War I. Though she came from wealth, she saw it as her duty to volunteer to “contribute actively to the allied cause,” according to the book, “Cora Van Norden in the War” written by her brother Theodore.

Cora was 38 when she sailed to France in February 1915 to begin her duties as a nurse in Paris. According to her brother, “Her only complaint was that the hospital was too far from the front.” This sentiment was a constant throughout her time in Europe. She wanted to be where she could do the most good. When she returned home to New York to help raise money for the Salvation Army’s work, she lobbied the French ambassador for permission to bring her unit directly to the front. His cable thanked her for her generosity, but told her it wasn’t possible.

However, Cora had her wish once the United States entered the war. The Salvation Army assigned her to work with the 18th U.S. Infantry, 1st Division and she stayed with them until the war ended. One officer praised her dedication by saying, “Miss Van Norden established her hut so near the front that the big guns were on line with it.” Another described her “exceptional service” when she delivered supplies under fire. She “was absolutely fearless and interested only in improving as much as possible the physical comfort of the men.”

Cora’s work did not go unnoticed. In a letter Cora was praised by Brigadier General F.C. Marshal, “I was caught in traffic and saw you pass. In a group of soldiers standing by my car was one who said: ‘There’s (I must underline the word for he put an astonished sort of emphasis on it) Miss Van Norden.’ God Bless her!”

In June 1918, Major General George Duncan wrote to General McAndrew to suggest that Cora be awarded the Distinguished Service Medal for her work. Major Duncan stated, “I consider her calm indifference to danger, her great desire to be of the utmost assistance to our front line troops was one of the finest examples of heroism that I have encountered and was an inspiration to officers and men.” In addition, on September 8, 1919 it was announced the French had awarded her the Croix de Guerre.

Unfortunately, her dedication took a toll on her health. After her discharge from her duties in 1920, her brother wrote that she suffered from disease and exhaustion. She never recovered and died two years later. At her funeral “was a detachment of 18th Infantry, 1st Division, led by a sergeant each of whom had known Cora in France,” her brother wrote.

All quotes are taken from Theodore Langdon Van Norden’s book, “Cora Van Norden In The War,” published in 1924 and can be found on babel.hathitrust.org.