Hannah was a Revolutionary War Patriot who was shot by the British when she was 42 years old.
Barbara Elliott O. 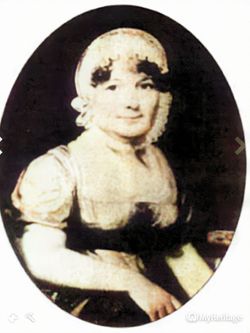 "Mrs. Caldwell herself felt no alarm. She had hidden several articles of value in a bucket and let it down into the well and had filled her pockets with silver and jewelry. She saw that the house was put in order, and then dressed herself with care, that should the enemy enter her dwelling, she might, to use her own expression, ‘receive them as a lady.’ She then took the infant in her arms, retired to her chamber, the window of which commanded a view of the road, towards which the end of the house stood, and seated herself upon the bed.

The alarm was given that the soldiers were at hand. But she felt confidence that no one could have the heart to do injury to the helpless inmates of her house. Again, and again, she said ‘They will respect a mother.’ She had just nursed the infant and given it to the nurse, who was in the room. The girl, Abigail, was standing by the window. A soldier left the road and crossing a space of ground diagonally to reach the house, came to the window of the room, put his gun close to it, and fired. Two balls entered the breast of Mrs. Caldwell she fell back on the bed, and in a moment expired. He wore a red coat, and is generally supposed to have been a British soldier. Some have attributed the act to a refugee. The little girl received in her face some of the glass when the two balls entered, both of which took such deadly effect.

After the murder, Mrs. Caldwell's dress was cut open, and her pockets were rifled by the soldiers. Her remains were conveyed to a house on the other side of the road, the dwelling was then fired and reduced to ashes with all the furniture. The ruthless soldiers went on in their work of destruction, pillaging and setting fire to the houses, piling beds and clothing in the street and destroying them, till the village was laid waste.

Let it be imagined what were the feelings of the husband, when the terrible news was communicated to him. It is said that he overheard some soldiers in a house where he stopped, speaking of the occurrence and by questioning them, learned the truth. La Fayette, on his last visit to America, informed one of the family, that Mr. Caldwell was with him that morning on the heights near Springfield, and saw, by the aid of a spy-glass, the smoke ascending from the burning houses. 'Thank God,’ he exclaimed ‘the fire is not in the direction of my house.’ He was fatally mistaken!"