As if things could not get worse, the extremely wet weather in the winter of 1813/1814 and again in 1816 caused crop failures and there was not enough food to go around.
Joan K. 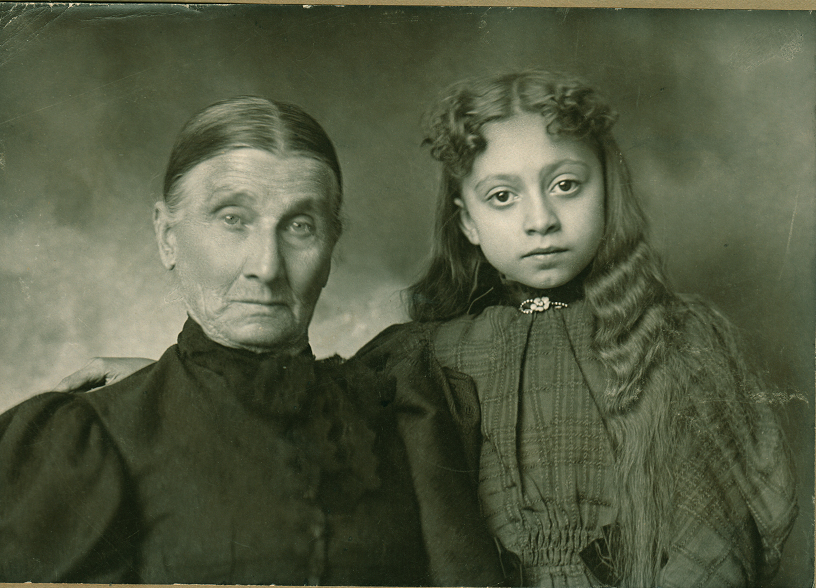 Magdalena Alter and her granddaughter Marguerite Longenbaker circa 1908

My Blattmann family ancestors came from Hochdorf in the Duchy of Baden, today’s southwest corner of Germany. Henrich Graner’s book: Freibrug-Hochdorf, opened my eyes to the harsh reality that was my ancestors' lives prior to their emigration to America. I can only marvel at the fortitude of these ancestors to persevere through the constant adversity that life flung at them.

The Blattmanns faced multiple hardships including war, poverty and disease during their time in Hochdorf. At the end of 1813, when Napoleon’s troops were pushed back over the Rhine, Hochdorf was overrun by the returning troops. The village provided housing and food for the troops, but worse than that was the typhus brought by the troops returning from Russia. From January through May 1814, forty-six inhabitants of Hochdorf died of typhus, approximately eleven percent of the population. In the midst of this epidemic, my great, great, great-grandfather Friedrich Blattmann was born on March 5, 1814.

As if things could not get worse, the extremely wet weather in the winter of 1813/1814 and again in 1816 caused crop failures and there was not enough food to go around. The bad weather also caused an increase in prices. The average age of death in Hochdorf for the time period of 1811-1820 was 17.2 years of age. During this time Friedrich lost three of his siblings (Conrad, age two, on January 10, 1818, Maria, age two, on September 8, 1820, and Johannes, age fifteen, on January 5, 1825). Also during this time, Friedrich’s future wife, Magdalena Alter was born in Hochdorf on October 20, 1822.

Things improved only slightly over the next couple of decades with the average age of death up to 27.1 years of age for the time period of 1841-1850. Friedrich married Magdalena Alter on November 20, 1843 in Hochdorf and their first child, Bernhard was born there on May 6, 1846. Their second child, Rosine, was also born in Hochdorf on February 15, 1849.

The years 1848 and 1849 brought a time of revolution in the various German states, including Baden where the goal was the formation of a Baden republic ruled by the people. The Baden military took the side of the rebels and the Duke of Baden fled to Karlsruhe where he requested support from Prussia. Hochdorf found itself siding with the revolutionaries and in the thick of the uprising. All unmarried men between the ages of eighteen and thirty needed to be armed and trained by the government and a forty-eight man militia was formed. Friedrich, being married, would not have served in the militia. However the citizens were required to provide food and housing for the militia, the penalty for not doing so was to be shot on the spot. Eventually the Prussian troops were called in and Hochdorf residents were now required to provide food, spirits, and housing for the Prussian troops and horses.

The revolution ended on August 22, 1849 and the aftermath left Hochdorf with overwhelming poverty. In 1850, a fund was established in order to support the poor. The fund provided medical assistance, food, and clothing to those in need within the community. In 1854 there were numerous hail storms and extreme heat causing deaths in the fields. The hunger emergency caused an increase in taxes to help feed the starving. It’s no wonder that Friedrich decided it was time to take his family to America.

Friedrich and Magdalena along with their children left their home in Hochdorf, Baden and traveled by land, most likely by rail, to Le Harve, France where they set sail for the United States of America on a three-masted sailing ship named the Sarah Park. Even the voyage to America seems to have been trying. The Sarah Park made an unusual stop in Southampton, England, where eleven steerage passengers died. Fellow passengers from Hochdorf were among the dead: the Maibrunn family lost their daughter Kunigunde and the Steuert family lost both their daughters, Therese and Maria Anna there.

After leaving Southampton, the ship was stalled eighteen days around George’s Banks. The Sarah Park finally reached New York harbor on December 21, 1854 with three hundred and six passengers on board. There were four deaths and two births on board during the voyage.

The Blattmanns certainly must have breathed a sigh of relief when finally setting foot on dry land again.